Hello everyone! It is the second day of 2023 and the last day of my 17 days off of work. The 2022 year was a challenging one between losing both my boyz (Bailey and Bandit - the cutest and sweetest chihuahua's ever) and starting a new job within my company. This time away from work was much needed and thoroughly enjoyed. Actually, I could easily get used to living life like this as it gave me time to work with my two new kitties (Minnie and Cooper), get out with my camera, and work on catching up on pics from my trip in Florida last April. With thoughts of Florida, I decided today I would share one of my photos from that trip since I have so many great ones to choose from. I took just over 19,000 photos and it has been a bit of a chore to get through them all.

I've been to Florida many times over the years and my last three trips were all photography related. Each time I've focused on a different part of Florida and each trip was very different. This last trip I took I split between Orlando and the Southeast region. The first few days I met up with my sister, Desiree, and my niece, Emily. I enjoyed time with the girls at the pool, in the hot tub, going to Emily's cheer competition, and of course visiting some hot spots for photographing wildlife.

When I was about to leave the Orlando area and head Southeast, I realized my car rental had a flat tire and so I found a garage. Surprisingly, it was open on a Sunday and they got me in and back on the road right away. Amazing place, they plugged the tire and didn't charge me a penny. Such amazing hospitality that I made sure to write them an awesome review.

After my little glitch, I headed down to an area where I had a blast. I was out every morning and every afternoon visiting various locations. I had the pleasure to see such an amazing variety of wildlife and the one animal that really fascinated me were the iguana's. I had seen some little iguana's on Sanibel Island a few years prior, but they were so tiny compared to the ones I was seeing in the Southeast area.

Iguana's are a herbivorous lizard and can be found in warmer/tropical regions such as: South America, Central America, the Caribbean, and Mexico. Iguana's lengths range between 1.5 inches - 6 feet. Yes, I said that correctly, they can get as big as a dog. They can be found on the ground, climbing trees, or resting on tree limbs. They tend to have various shades of either green or brown and they blend in very well with their environment, which makes them a little more challenging to find. Iguana's have keen vision and forage on vegetation and foliage and have a strong bite force.

I had the pleasure of seeing iguana's in various locations, including in the Target parking lot and a tree right outside the window of my hotel. It was so funny to look up from eating lunch and see an iguana in the tree, looking in and watching me.

Although I didn't have to go far, my favorite places to see and photograph them were at the Green Cay Nature Center and Wetlands and Wakodahatchee Wetlands. The first one I saw on my trip was first thing at Green Cay. In fact, there were three of them in that same tree and every morning I went to Green Cay, they were there. I didn't see many others at Green Cay, but at Wakodahatchee, I found them everywhere. All different sizes and colors. They were mostly slow moving and munching on the grass. I was in my glories. Some were even relatively close and I was able to get a really good look at their markings. They are simply beautiful creatures! However, don't get me wrong, I wouldn't want to attempt to pet one or get into a tango with one as they do have a strong bite and sharp teeth, which could be painful. Thankfully in both locations, I was able to enjoy them from the safety of the boardwalk. It was so much fun that I do want to go back and see them again. With that, here is a close up I got of one at Wakodahatchee. Check out those markings and how fierce that guy/gal looks! 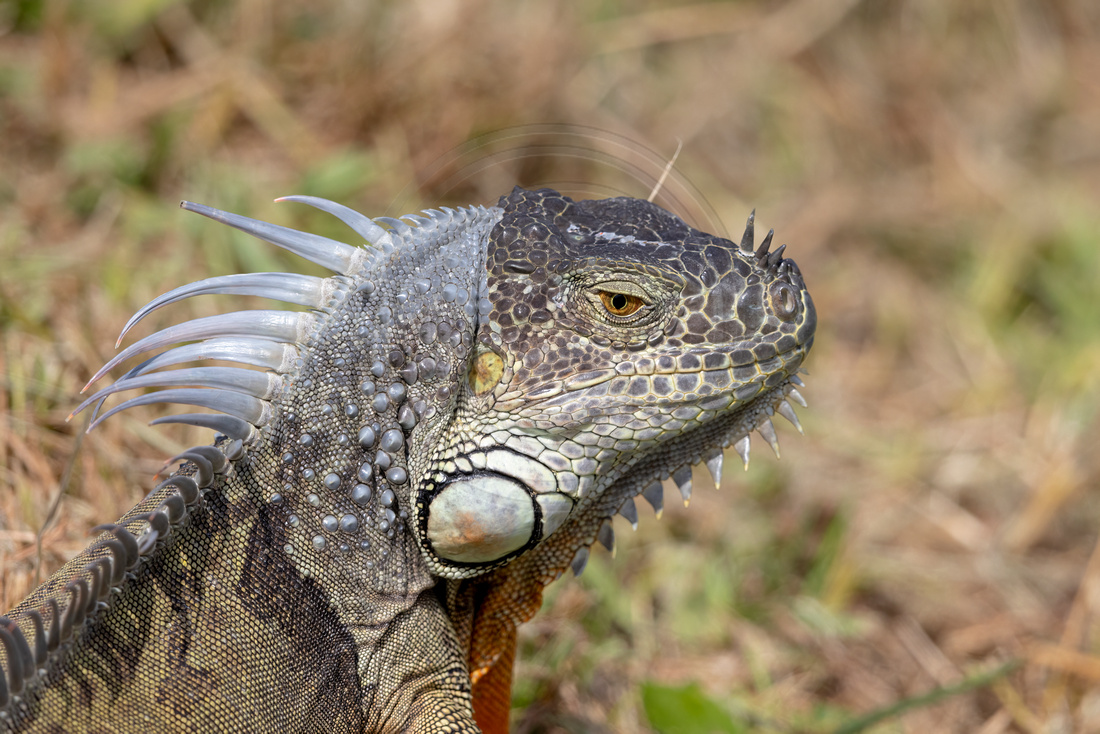 IguanaThis is a photo of an iguana at Wakodahatchee Wetlands in Florida. This image was taken by Debbie Quick from Debs Creative Images.