My day started a little late as the boyz and I took advantage of having no commitments and sleeping in a little. Part of me regretting sleeping in on such a gorgeous day, but my body just wasn't ready to get up and every once in a while, I need to listen to what my body says.

I had many plans for today, but I wound up ditching most of them to enjoy the precious little fawns as I didn't see them at all during the work week. As soon as I arrived on location, I spotted fawn #1 snoozing under a tree. I took a quick photo of the fawn and then proceeded to park my car far away to avoid disturbing it. When I got out of my car, I spotted a mockingbird on the tip of a branch in a tree. I positioned myself best as possible with the sun behind me to get a few photos of it. Once I was done, I lowered the camera and began to look around. It was then that I spotted the mama of fawn #1 in the bushes below the mockingbird, just staring at me. I felt bad that I hadn't noticed it upon approach as I would have left, without photographing the mockingbird. So, as soon as I realized she was there, I left the area and began my journey to look for the other fawn.

It didn't take me long to find fawn #2 as it was a short walk away from fawn #1. It was in a terrible spot for late morning pics as it was in complete shadow, so I adored it for a minute and then continued on to walk and get in some steps. I walked for a maybe a minute down the path and there I spotted mama #2 who was apparently the mama of fawn #2. I've always known that the moms are always nearby to keep an eye on their babies and it was so cool to actually witness them both being within sight of their young. I spoke to her for a minute and thanked her for letting me get to see her beautiful young fawn. I even took a few shots of her before saying goodbye and continuing my walk.

I spent most of the day just walking around and checking in on fawn #1 and fawn #2, making sure not to stay too long watching either of them. I even saw mom #1 and mom #2 several times as they both stayed in the same areas for the majority of the day either grazing on the grass or simply laying in the shade keeping an eye on things. I had many opportunities to photograph both mamas as well as both fawns. I even had the opportunity to speak to both moms and thank them for sharing their beautiful babies with me.

In addition to enjoying all the deer on site, I also had fun photographing the groundhogs, mockingbirds, and northern flickers. The northern flickers were a real treat as I've never gotten to get so close to them to get photos. The groundhogs simply cracked me up the way they would waddle away as quickly as possible. And I must say that I never realized how many mockingbirds we have on site. They too were hilarious to watch and listen to. I think many of them had nests nearby as they were constantly yelling and chasing other birds. It sure was entertaining to see all the activity.

Eventually I went to my car and moved it to a location so I could sit and observe the area with the sun behind me. This was in the area where fawn #1 and mama #1 were both resting. The fawn was snoozing under a tree and mama was chilling under a bush keeping an eye on things. Both were distant from me so I took a couple of shots, but mostly just watched and enjoyed the beauty. It wasn't long after I got comfortable in my car when I saw mama #2 approaching the area with fawn #2 following behind her. Both did a quick run through and headed into a small wooded area. Shortly after, mama #1 got up and signaled for her baby to come over. Fawn #1 got up and ran towards her. It nursed for a minute, then they both began to proceed towards the wooded area where mama and fawn #2 had went. Half way there and they both stopped and the fawn began nursing again. This time it was really distant, so I quickly threw on my 2x teleconverter to make my lens turn from 500mm to 1000mm. It was still a bit distant, but such an amazing blessing to see. So here it is, the precious fawn nursing off of mom. Very distant, even with 1000mm, so this shot is a bit of crop. Either way though, such a joy to see. In fact, the biggest highlight of my day. I could not have asked for anything better! 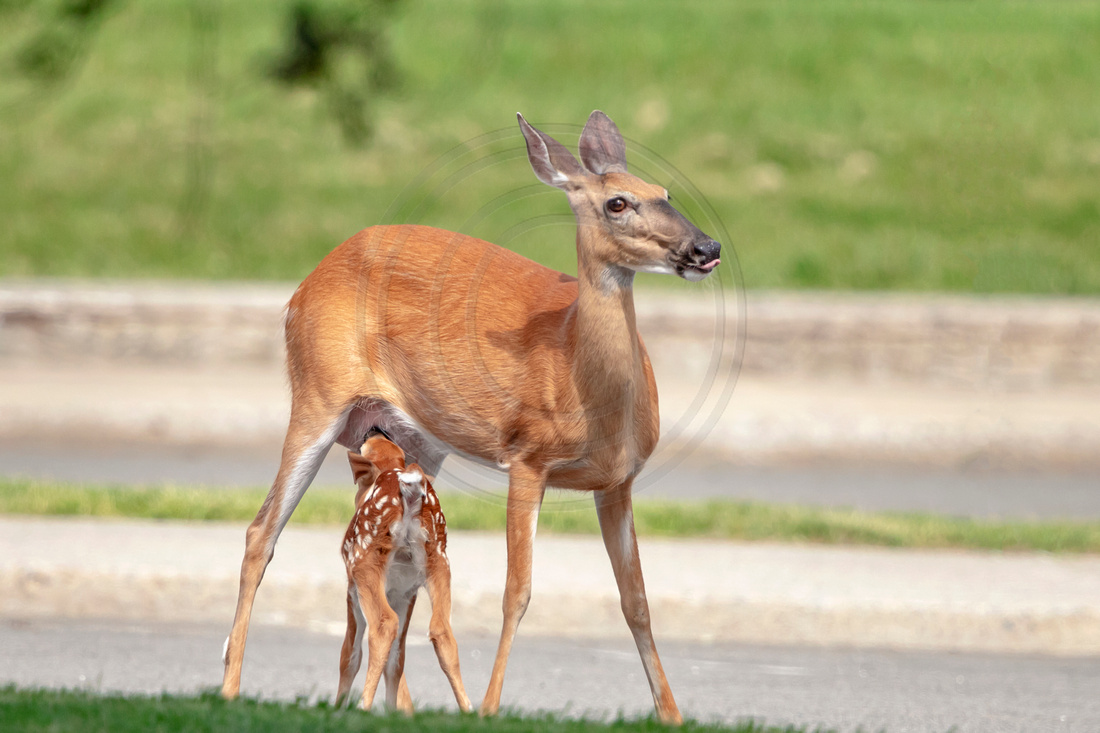