Sixty eight days I ago I booked my airline reservation to go with a photography friend to Northeast Maine to see the Atlantic Puffins. At the time I booked my reservation it seemed like the trip was so far away. Then last week came and I realized I was two days away from my trip and so I scrambled to get my chores done and get my gear together.

Yesterday, the day was upon us and so I drove my dogs out to my parents house and then proceeded to Drive to Leesa's house so we could take a taxi to the airport. When I arrived at Leesa's house something didn't seem right and I had a gut instinct that I was in the wrong place. Sure enough, I wound up waking up a drunk guy at 12:30 in the afternoon after he spent the night partying with his Military buddies. I felt so bad that I had woken him up, but he was very kind and assisted me into getting to where I needed to be which was 15 minutes away.

Eventually I met up with Leesa and we headed to the airport. Our flight had an initial delay because it arrived late to the airport. Then after we boarded, one of the engines wouldn't start and so they had us get off the plane so that the maintenance guys could take a look at things. In the end we wound up departing 3 hours late and arrived at the airport in Bangor, Maine very late. That was a bit of a hassle, but tolerable. The bigger problem wound up being when my checked bag didn't arrive with us. We wound up leaving the airport almost an hour later than expected, minus one bag. It was a slightly stressful trip, but then today came quickly and the amazing opportunity assisting in alleviating the pain from yesterday.

We arrived at the bay roughly a half hour before our tour with Bold Coastal Tours to Machias Seal Island and proceeded to board a skiff (a shallow, flat-bottomed open boat with a sharp bow and square stern) that took us to the boat to that would make the roughly 50 minute (10 mile) journey to the island. Once all passengers were onboard our tour boat (Barbara Frost), Captain Andy introduced himself and went over some info about the area of Maine we were in and some of the safety info. We then proceeded on our amazing journey.

The tide was low, there was a slight breeze, and the water conditions were great for the journey. It was a pleasant ride over to the island and we even had an opportunity to photograph a lighthouse on the way. There wasn't much to see on the journey, but as soon as we got close enough to the island we could see all kinds of birds. There were Atlantic Puffins, Arctic Terns, Common Terns, Razorbills, and Common Murres.

Once we got close enough to the island, Captain Andy put out the anchor and prepared the skiff to get us to the island. There were 18 of us on board and he brought us to the island in groups of 6-7. Once we got over to the island we had to hold onto the handrail and very slowly and carefully walk up the path. Since the tide was low, the water was out, and the walkway was extremely slippery. Once we made it up to a safe area we waited until everyone from the boat was on land before we had a quick briefing of the rules and went up to the waiting area. As soon as we went through the magic gate we were walking past Arctic Tern nests and they were dive bombing us. I'm not sure if anyone else found it comical, but I was a bit amused. Once we got up to the waiting area, we were split up and half of us got to go to the blinds for our 45 minutes of fun while the other half of the group waited for their 45 minutes of fun.

Being in the blind was a truly amazing experience. We mostly saw razorbills, but did get many opportunities with puffins and just a small handful of opportunities with the common murres. There were birds everywhere, so many that I couldn't possibly count. Easily thousands of birds. They were in front of us, to the sides of us, and even dancing around on the roof. Not only were the birds everywhere, but they would come in so close and some would even stop and look inside the blinds at us. They new we were there and they didn't hesitate to pose and put on a show. We didn't get to see any interactions of the puffins pairs together, but there were many instances of the razorbills grooming and preening each other. They seemed so in love and happy to have such a relationship.

In some ways the time in the blind seemed too short as we couldn't get enough. There was so much activity and it was completely amazing. On the other hand though, it did stink in there and my back and arms were hurting from the way we were positioned and from the weight of the camera.

Eventually we all met back up in the waiting area and then headed back to the boat for our journey back to shore. Before leaving the island, Captain Andy drove us in close to get shots from the water. Then he proceeded to gull rock (which was another tiny island nearby) that was filled with seals. Many seals were laying on the rocks and a bunch were swimming around in the water. It was difficult to photograph them between the rocky boat and their fast moves, but I still snapped away.

By the time we began our journey back, the tide had come in and was much higher. Also, the water was relatively choppy. Not scary choppy, but just enough that Captain Andy had to make the trip back slower and he had to strategically work with the water and winds.

It was an amazing and special day and I'm excited that we are booked for 2 more tours. Here is a sneak peak of one of my shots of the Atlantic Puffin. They were small, fast, and completely entertaining to watch. 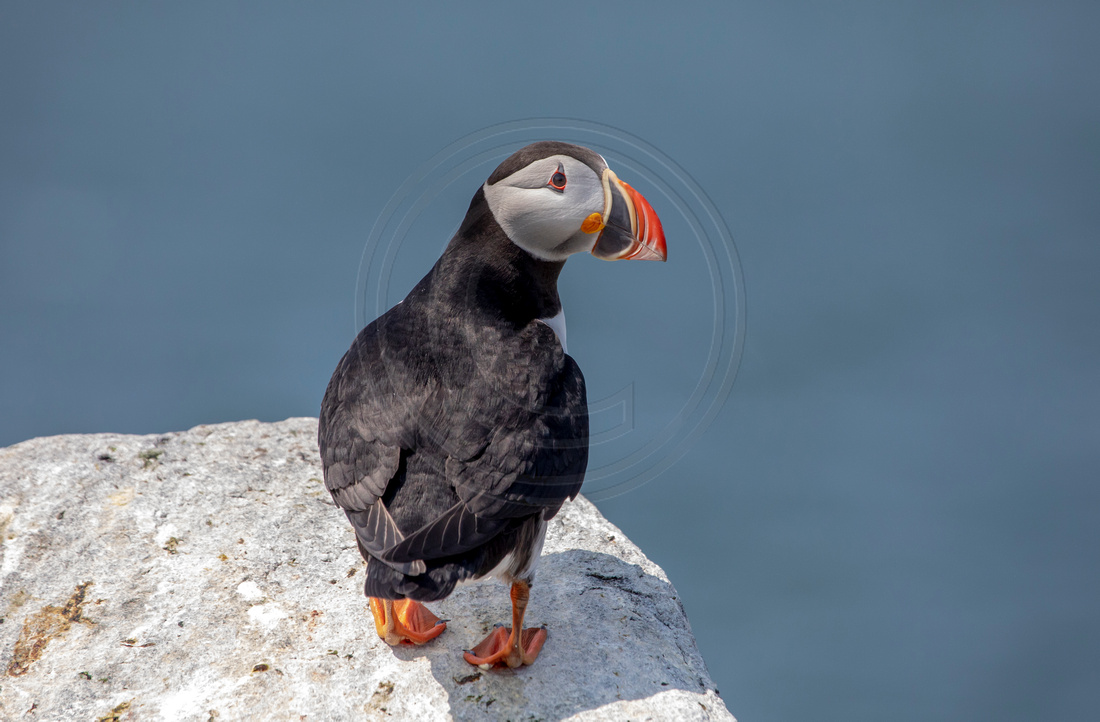