I woke this morning to a few inches of wet snow on the ground. I cleaned up the dog pen and the driveway, then sat at my desk to work for a bit. Eventually, I decided to head to the office and I made a couple of stops along the way. I was really hoping to find a red fox in the beautiful white snow, but I had no luck with that. Instead I stumbled across a pair of bald eagles sitting side by side in a very tall tree and a great horned owl sitting on eggs in a tree cavity.

Great horned owls generally roost in trees, on man-made structures, ledges, thick brush, and in tree cavities. They are nocturnal creatures that are mostly active at night (especially at dawn and dusk). Just like many other raptors, mated pairs mate for life and are very territorial of their territory. The will defend their territory by hooting and will respond to intruders by hissing, screaming, bill-clapping, and guttural noises.  They will even spread their wings and strike with their talons if necessary. Smaller birds such as songbirds, crows, and ravens tend to harass great horned owls by dive bombing and chasing them.

The diet of a great horned owl consists mostly of mammals and birds. They will go after small rodents (mice, moles, voles, chipmunks, squirrels, etc), waterfowl (ducks, loons, etc), songbirds, ravens, crows, hawks, smaller owls, and even reptiles. When in hunting mode, they may hunt from a perch above or they may walk around on the ground while stalking younger prey. Most hunting happens at night, but sometimes they will hunt during daylight. Especially if they have young to feed and need to capture more food than when caring only for themselves.

During nesting season, great horned owls generally do not build their own nest. They tend to take over a nest that was built by another species, use a tree cavity, a deserted building, man-made platforms, or on cliff ledges. Sometimes they may choose to line the nest with leaves, feathers (their own or feathers from prey), shreds of bark, or pellets. Due to the fact that they don't build their own nests and that nests eventually deteriorate, they will move on to a new nest at some point.

Nesting season happens only once per year and the female tends to lay 1-4 eggs. The incubation period is generally 30-37 days and the female will sit on the eggs the whole time to keep them warm and safe from predators. Once there are hatchlings, the young ones will stay in the nest for roughly 42 days before they fledge. While they are small and young, the female will not leave them unattended, but once they get large enough and the nest gets too crowded, she may take breaks outside the nest and keep an eye out from close by. If the hatchling leave the nest too early and can't fly, they will often climb up the tree to get back up.

Some things to keep in mind about owls is that if they feel disturbed or threatened, they will abandon their eggs. Due to this sensitivity, I will keep my distance and check in again closer to hatchling time as they are less likely to abandoned children than they are eggs. Additionally, due to the sensitivity, I will not disclose the location of the nest.

Please enjoy the post and once there are hatchlings, I will give an update on how things are going. 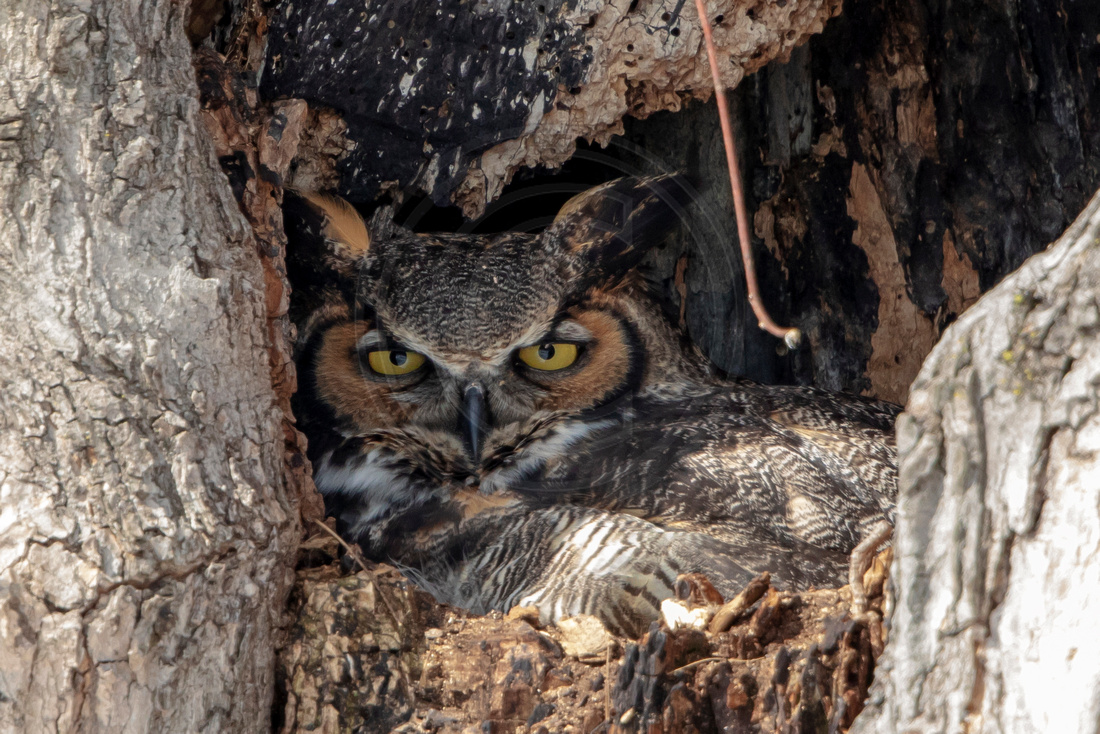