On Saturday night we had our first storm of the year. The expectation was 7-10 inches of snow, instead we had roughly 4 inches with a solid layer of ice over top. It was heavy and brutal to shovel and my dogs clearly were not amused by it. Then last night temps dropped to zero degrees. That caused everything to not only ice over, but ice within. With the temps being so low, I had to get up every few hours and run the water to make sure my main pipe coming in didn't freeze. Although there is heat tape and really good insulation around it, when temps get below 15 degrees there is need to worry.

Due to the temps still being so low this morning, I decided to work from home so I could continue to run the water throughout the day. All went well, I got lots of work done and I had no issues with pipes freezing (unlike some of my neighbors who woke to no water this morning). Later in the day I took a little break and went outside to throw something out when I saw a hawk fly into the pine tree over my neighbors home. I went back in and grabbed my camera. There was no time to put on cold weather gear, so I froze my butt off trying to find a good spot to get a couple of photos. After maneuvering around a bit, I found a spot with the sun behind the bird. Luckily, there were enough branches between the hawk and the sun that the sun behind it wasn't too much of a problem.

I sat and watched the immature red-tailed hawk as it eyed the birds in my yard. Periodically it would glance at me, but then it would shift its gaze back at my feeder birds. I waited in a good position for it to swoop down and get one, but that never happened. After roughly 10 minutes of freezing and watching the hawk, it swooped down off the tree branch straight at me. I was startled and ducked as I watched it swoop back up and over another neighbors home. I've never had a hawk swoop at me like that before, it was a very uncomfortable feeling.

While watching the hawk, I noticed there is also a big nest in the tree it was perched in. I couldn't see it well from the angle I was at, but it looked like one made of sticks, so I'm hoping it could possibly be a new nest being built. Possibly constructed by hawks as it is very nice size. Once the weather is a little warmer, I'll try to see if I can see it better.

In the meantime, I hope to see that immature red-tail again! 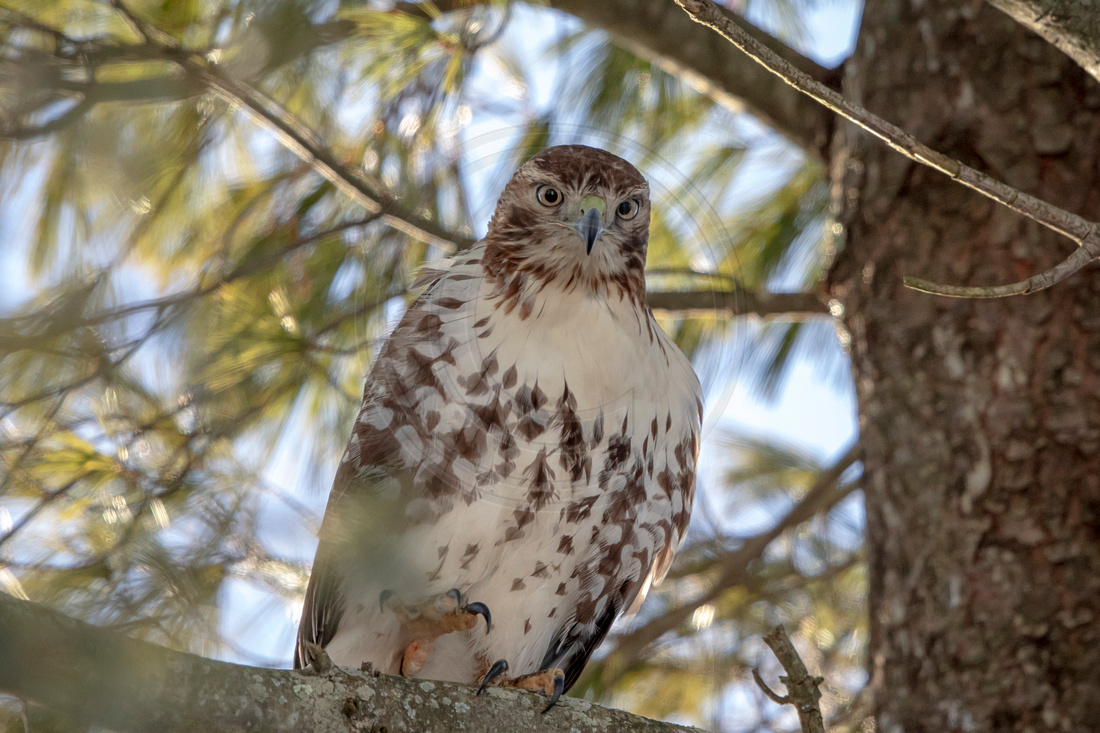