Too Much to Swallow

Today was the second full day at the dam and it was a lot slower than yesterday (not that yesterday was all that busy). We got there before sunrise and sat in the cold and dark before anything took place. It looked like it would be a really active day as there was a lot of flying in the early morning and we could see a lot of eagles across the river on rocks, on the ground and in trees. Sadly though as the day progressed we had a lot of cloud coverage, the wind got stronger, and there wasn't much activity.

In the mid-late morning our biggest action was the juvenile bald eagle that the locals named Scooter. He/she stayed on the side of the river where all the photographers were and flew up and down the side. Scooter landed in the trees and fished in the area's below the trees he had landed in. His fishing skills were really good as he always caught something. Today most of his catches were small, but he at least had a catch. After many of his catches he was chased by another eagle who had tried to steal it from him. In some of the cases he dropped his catch and in others he got away with it. He was fast and always on a mission, often times tough to photograph as in addition to being fast he was too close to the shoreline and the photographers.

The other big highlight of the day was at the very end of the day when the light had gotten crappy and we had a great blue heron land along the shoreline with the photographers to hunt. We witnessed the heron catch three enormous fish, none of which he ate. He either flew off with them and lost them because eagles were chasing him or he dropped them back into the water because they were simply too large. When he caught the second one we thought for sure it was going to go down that hatch as the heron had it in his mouth and in position, but he didn't eat it. It wound up back in the water.

All in all.... the day was slow and mostly overcast. My toes were really cold through most all of it as the only times they warmed up was when I made the long walk to the overly heated restroom and stayed in there for a few minutes before walking back to my post.

I got some really awesome shots of Scooter, but since I posted an image of him yesterday I thought I would change things up and post one of my shots of the great blue heron with his seriously large catch! Here's to hoping tomorrow will be a more active day! 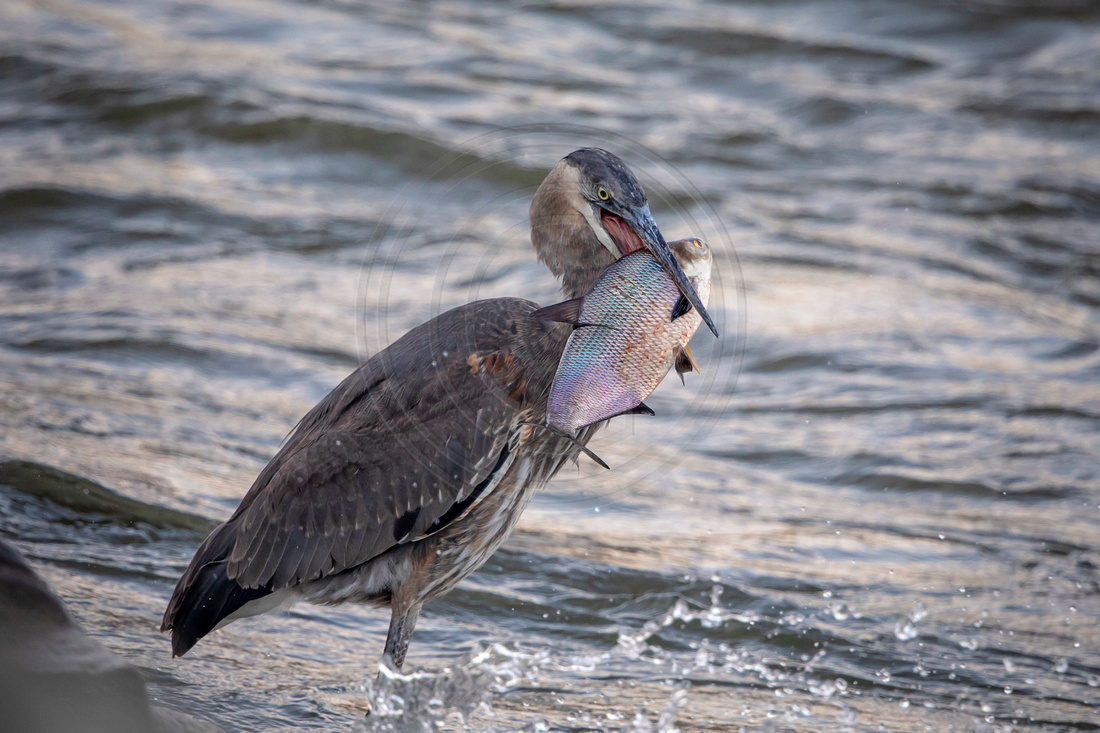