Day 3 at the Conowingo Dam was absolutely AMAZING!!!!! I'm in shock that we've had two full days of non-stop activity. This is my third year going to the Dam and by far the BEST experience I've ever had.

Again today the eagles put on one heck of a show between fishing and chasing each other. We watched as eagles made off with their catch and we also watched eagles lose their catch. Honestly, I've never seen so many flying fish in my life. Sometimes the fish would fall back into the water and either the same eagle or a different one would swoop back around and get it. Other times one eagle would drop the fish and another eagle would catch it. And on only a couple of occasions, the fish fell on land where the vultures swooped in for the meal.

There was a nice variety of action happening too far, action happening at the perfect distance, and action happening too close. Too close, whoever would have thought I would make that comment and yet that happened several times today. At one point, I had a three eagle chase so close it was impossible to get any of them into the frame. They were close and they were fast. I even had a banded eagle come so close I was able to read the numbers on the band! I'm super excited to report that and find out the info on that eagle.

The shot I've decided to use as my blog post today is of an immature eagle that came right over our heads with a fish. There is NO crop on this shot. This shows exactly how close these guys were getting to us today, so close it was impossible to get the entire eagle in the frame. It was absolutely amazing and I feel incredibly lucky to be witnessing such awesome activity! 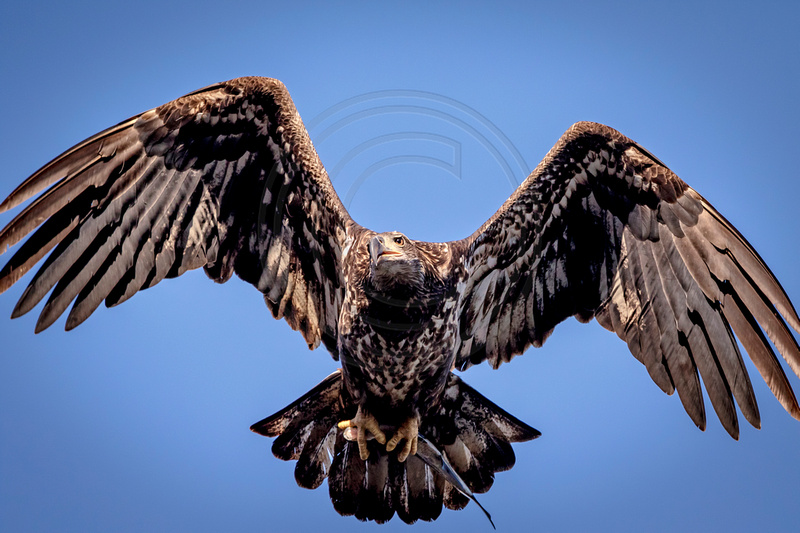