This morning was a little hectic as Cooper (my new kitty) had an appointment with his new Dr. He still doesn't come to me and he doesn't like to be picked up or held, so it was a bit of a challenge to scoop him up and get him in the carrier. On my first attempt he fought me and scratched me, so that prepared me for the second attempt which was successful. His visit at the vet went very well. He was well behaved and everyone thought he was so beautiful. One of the ladies said he's so soft he feels like a rabbit. I thought that was really cute.

The day went on and I worked until almost 6:30, so now it's time to throw together a blog post. I was a little stumped at first on what I wanted to share and then the Atlantic Puffins came to mind. Way back in 2019 a friend invited me to go on a trip with her to Maine to see the Atlantic Puffins. I was a little hesitant at first, but then the more I thought about it, the more I realized it would be a fantastic opportunity. So, we planned our trip and then in June, we went to Cutler, Maine.

The beginning of the trip was frustrating as our connecting flight got delayed by several hours, which put us into Bangalore at 10pm (hours later than we were originally scheduled to arrive). Then to top things off, my luggage did not arrive. And nothing was open on the almost 2 hour drive to our hotel in Cutler. Thankfully, I was able to get a few key items before leaving the airport and then my friend was so kind to loan me a few things. It was frustrating, but I survived and the puffins helped me to overcome the challenge.

We were booked to take the tour boat to Machias Seal Island for three days straight and somehow the weather cooperated and we got onto the island all three days. One of the days we got to spend 90 minutes in the blind and the other two days we got to spend 45 minutes in one. There were four blinds in total and we arranged it so we got to try out a different one each day. It was spectacular. There were thousands of birds all around us and dancing on our heads (on top of the blind of course, lol). There were Atlantic Puffins, Razorbills, and Common Murre all around. We even got to see one of the razorbill pairs mate while we were there. All three days the water was calm enough for getting onto the island, the sun shined brightly, and the water had the most beautiful blue hue. It was an amazing backdrop for photos. Each day after we spent time on the island, the captain took us for a little spin around it before heading back to port. Two of those days we got to see the Harbor Seals lounging in the sun. That was such an unexpected bonus!

Atlantic Puffins is a species of seabird who are native to the Atlantic Ocean. They breed in many different countries that surround the Atlantic Ocean: the United States (on the islands just off the coast of Maine), Iceland, Nova Scotia, Newfoundland, Russia, France, and the Faroe Islands. They spend all of fall and winter out to sea and arrive on land in early spring to begin their breeding season, which ends in mid summer. When out at sea, they lead solitary existences, yet when on land they tend to nest in clifftop colonies. They nest in burrows and the female lays a single white egg. Once the chicks hatch, the parents tend to feed them mostly fish until they fledge, roughly 6 weeks later. After the young fledge, they head out to sea for several years before going back to land.

Watching the puffins was so much fun as they are probably the goofiest birds I've ever seen. Perhaps some day I'll get another opportunity to see Atlantic Puffins. Or perhaps one of the other species of puffins, since there are two others: the tufted puffin and the horned puffin, which can both be found in the northeastern Pacific. 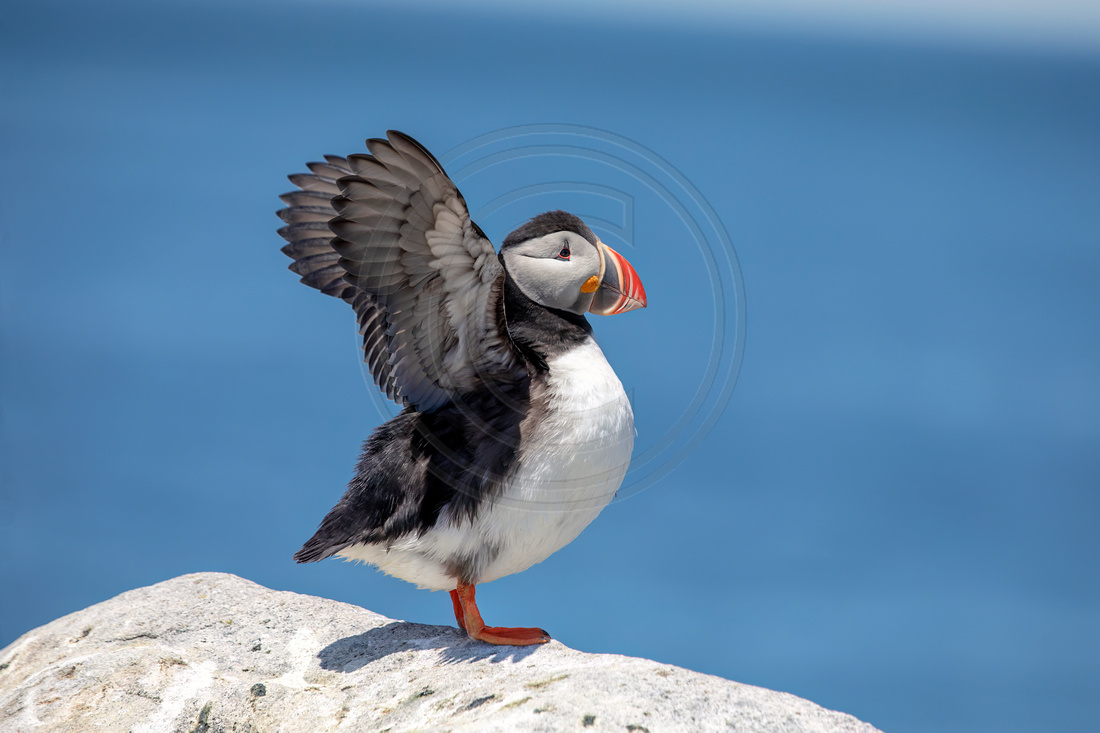 Atlantic PuffinThis is an image of an Atlantic Puffin at Machias Seal Island, just off of Maine. It was taken by Debbie Quick from Debs Creative Images.