Monday's are brutal. Especially when you work 10 hours and 7 of them was in meetings. The nice part of it though was seeing the snow fall every time I looked up. It didn't accumulate to anything, but it sure did look pretty out there.

In addition to working a long day, I am still recovering from all the activities of the weekend. I was so beat last night that I was in bed at 8pm, with the lights off my 8:45. I must have crashed because the next thing I knew the cats woke me up at 12:30 am. They were running around and being all crazy until after 2am, keeping me up. Eventually I did fall back to sleep and before I knew it the alarm went off.

At this point we are less than four month away from camping season and I can't help but start to feel excited. I have a bunch of stuff I still need to get as I will have to get all the necessities required for bringing the cats up and making them comfortable. In addition to thinking about all the things I need to get, I think about the wonderful selection of wildlife I get to see up there. On several occasions over the years I've had opportunities to see American Mink, which is really awesome as they are an elusive animal that I hardly ever get to see at home and I just love seeing them.

There was one day in particular that really stands out for me. I was kayaking in a pond and photographing a pair of common loons with their two chicks, when out of nowhere they started calling out this sound I've never heard before. I'm guessing it was a warning sound as they were yelling and quickly moving in another direction with their chicks. As much as I wanted to move along and stay with them, something in my gut told me to head towards the land we were near because there had to be something going on over there. Sure enough, there it was, an American Mink. And then, a second American Mink. I couldn't believe my eyes. As much fun as I was having with the loons, I had to take a break and enjoy the mink. I didn't want to startle them, but wanted to stay close, so I paddled as delicately as possible to follow along and stay along side them. One disappeared, but the other hung out with me for almost a half hour. It gave me many opportunities to take pics. It even came in towards me and gave me some nice opportunities for close up shots. It almost seemed as curious about me as I was about it. It clearly was a special moment.

American Minks are a semiaquatic species that are native to North America, South America, Europe, and Asia. They are carnivores who tend to feed off of fish, rodents, frogs, birds, and crustaceans. They have a breeding season of roughly 3 weeks and the females will often mate with more than one male. Mating is rather vicious as the male will pin down the female and bite at the nape of her neck. Mating can last anywhere between 10 minutes to 4 hours. The gestation period for minks can last 40-70 days and the litter will consist of roughly 4 kits who are born between April-July.

The saddest thing about American Minks is that they are the most hunted animal for their fur.

Here's to hoping the hunters stay away and I get to see more of these critters during the upcoming camping season. 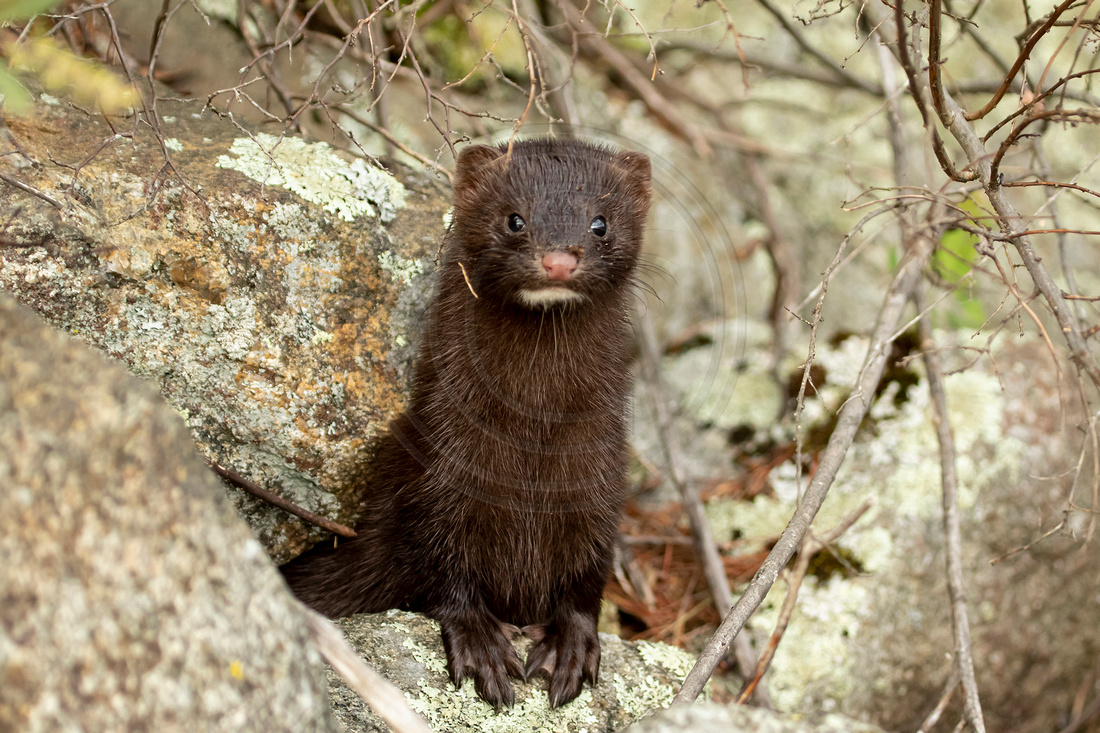 American MinkAn American Mink along the side of a pond in the Adirondacks. This image was taken by Debbie Quick from Debs Creative Images.