It was slated to be one of the hottest days of the year, possibly the hottest, but that didn't stop me from going out to check on my local Osprey family. Upon arrival I found all three kids in the nest and both parents perched in the favorite tree keeping an eye on things.

I went over to watch the nest and get some shots of the youngsters. One even gave me a great opportunity with a wing flapping session. I watched excitedly thinking that it won't be long before they fledge. Then Mike from the garden came over to chat with me for a minute and he mentioned that they all fledged last week. It seems early and I was sad that they fledged without me, but I stood around watching and hoping they would give me some action opportunities.

I waited for the longest time and nothing much happened. They had a small fish in the nest and one ate some of it, then moved away and one of the others took a few bites. It was later in the morning when one of them finally finished off the remains of the fish. After roughly 45 minutes of me watching, mom took off towards Lake Champlain and was still gone when I left.

Then around 11:00 a group of people showed up at the gardens and the Osprey seemed a little annoyed by it. They started yelling and flapping and one took flight, giving me fantastic opportunities for some photos. After his 5 minute fly around, a second osprey decided to take flight and stretch his wings. The third osprey just sat in the nest, flapping away, but never took off for me.

It was almost an hour later when another osprey decided to take flight and he/she headed straight towards me and over my head. It came so close I couldn't even photograph it, so I watched in awe. I'm not sure if the osprey was trying to scalp me or was just curious of me and checking me out. All I'll say though is thankfully I still have all my hair!

That kid didn't stay out for long before heading back to the nest and then one of the others flew out. This time, the kid landed in a pine tree nearby instead of going back to the nest. I went over and got a few shots, then returned to watch the youngsters in the nest. By 12:30 I had enough of the sun and the super hot temps, so I called it a day. Two kids were in the nest, one was in the pine tree, and dad was still perched nearby keeping an eye on things!

It sure was a fun morning and I wish I could have stayed longer, but the heat and I don't get along, so I went back to camp and hung out with my dogs in the AC! 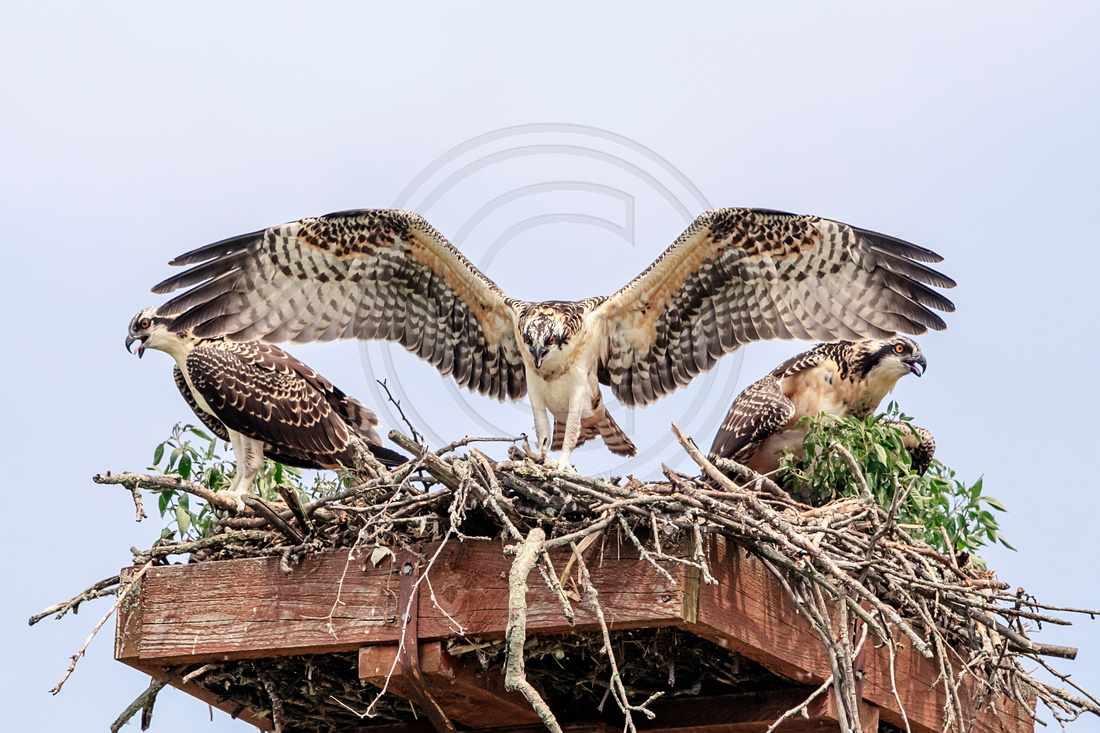