Hi everyone, I know I've been a bit of a blog slacker lately, but it has been simply too hot and humid out for me. Yesterday afternoon we had a thunderstorm and the humidity finally broke enough so I could get out. I contemplated going out after the storm, but by that time I always already involved in stuff at home, so I waited until this morning to grab the camera and go.

Lately, I've been at a loss as to where to go and what to photograph because I am getting a little bored of going to the same places and seeing the same stuff. Today however, I decided I would check out the Creek where my friends have all been getting photos of Great Egrets. By the time I got on location, light was a bit tough, but I made the best of it. I saw a total of 9 egrets and had 5 come in relatively close for photos. Two came in really close. In addition to enjoying the egrets, I also had an opportunity to photograph great blue heron and cedar waxwings as they also came in close enough for photo opportunities. I had other visitors that didn't come in close for photos, so I just watched them. There were two red-tailed hawks, two cormorants, a green heron and a mama duck with her big ducklings in tow. I sat at the creek for roughly 2 hours and enjoyed the sunshine, the breeze, and all the wildlife that decided to make an appearance.

After I left the creek, I figured I would stop in at the IBM site and see if I could find the deer. I did a very slow circle through the entire site and just as I was about to give up and leave, I saw them hiding in the woods. There were two females and two fawns. One female stayed close to the fawns and the other was a distance away. I strategically parked my car so I could wait and see if they would come out of the woods.

I was there for just over two hours when the sun decided to shine and the doe with the fawns came out of the right side of the tree line. I very slowly and quietly grabbed my camera and walked to the back of my car and got a few shots of her before she noticed me and decided to go back into the woods. Then a few moments later, the other doe came out of the left side of the wooded area and started to head away. I watched her for a bit and took a few shots of her even though she was a bit distant. As I was watching her, I noticed the two fawns come out of the wooded area and they began to head over to the open sunny spot I hoped they would go to. At that point, my attention left the doe and my focus was on the two beautiful fawns.

As the fawns walked towards that sunny area, they nibbled on the grass. One of them didn't pay any attention to me and continued on to hang out under a tree and eat grass. The second fawn was very curious about me. It was staring right at me, wagging its tail, and moving it's front legs in away as if it wanted to charge at me. I was a very good distance away, but a little nervous. After a few minutes of this behavior, it ran past the first deer and stood in another spot where it proceeded to watch me. Then, to my surprise, it started walking towards me and checking me out. At this point, the mama deer came out and so the fawn maintained its distance. I quickly turned my focus to mom and got a few pics of her before she and the kids grouped up and headed back into the woods.

I waited over two hours to see them and can honestly say it was worth the wait. Although the moment with them was short, it was magical. After they retreated to hiding in the woods, I packed up my gear, said thank you and proceeded to go home with a big smile that went from ear to ear. 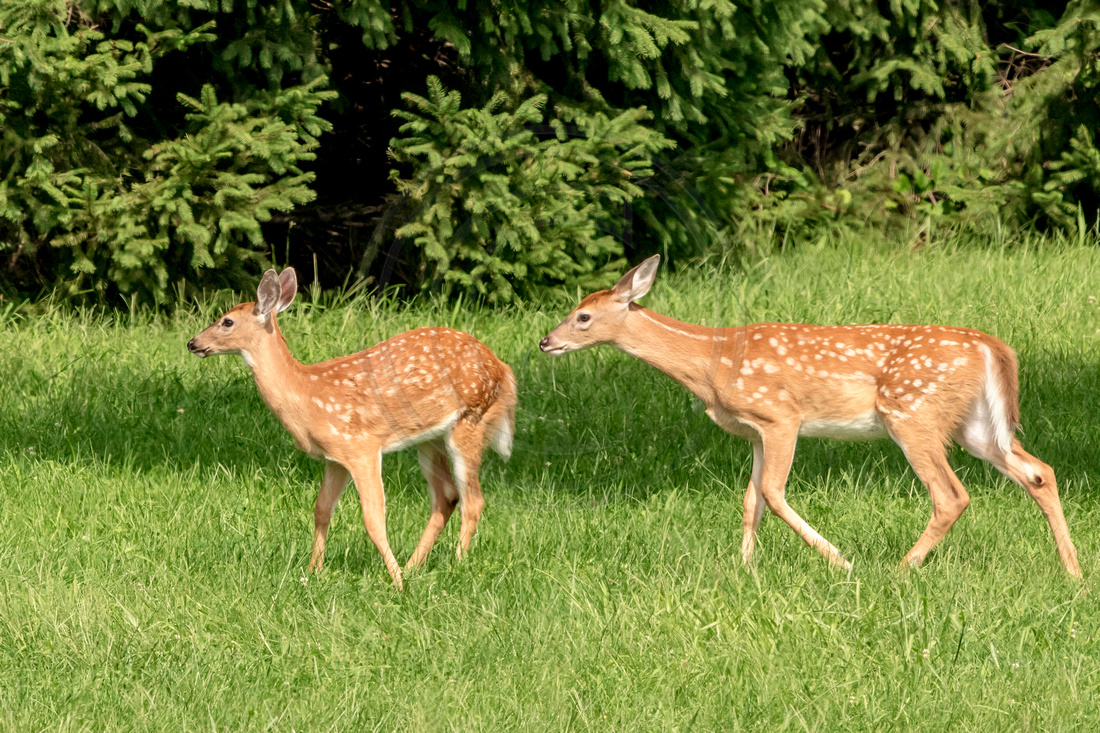