I've been on vacation all week and the weather has been rather yucky with lots of overcast, rain and horrible thunderstorms that included hail. The sun finally appeared today and so I had the opportunity to get out. It wasn't as sunny as I expected, but that's ok, I'll take what we got since it was way better than what we've had all week.

I relaxed and hung out with the boyz this morning and was out of the camper by 10ish. I first headed to Crown Point to check on my favorite pair of Osprey. When I arrived, the female had landed in the nest for a couple of minutes and since the male had no interest in getting up and leaving, she decided to take off. I sat and watched for a long while as he sat on the eggs and periodically got up to rotate them. Such an attentive dad as he must have rotated them 7 or 8 times while I was there watching. Eventually he was ready to leave and he called for her return. In fact, he called a little here and there over the course of a half hour before she finally returned with a small stick for the nest. Once she returned, he sat for a minute, then took off.

By that time, it was rather overcast and the light stunk, so I took off for a drive into Vermont. I cruised around Vermont and checked out some of my favorite Wildlife Management Areas. At one of them I witnessed all kinds of fish jumping. Wish I could get a photo, but it would happen so fast and I never knew where it would happen. I also watched a Great Blue Heron catch a nice sized fish. That was kind of distant, so I'm sure I didn't get any good photo's of it, but it was fun to see.

After my drive around Vermont, I stopped back in and took a quick look at my Osprey. One of them was in the nest, but I'm not sure which. I considered staying longer to see a turnover, but since I didn't know how long the wait would be, I figured I would head back to camp and hang with my boyz.

My photo for today is of the male leaving right after mom returned with the stick. They are such an amazing pair to watch! This is now my third year hanging out with them and I'm anxious to see how many kids they have. In the past two years, they had two kids each year. I keep hoping they'll have three, but the realistic side of me is expecting two. As soon as I know, I'll make sure all my blog followers also know! 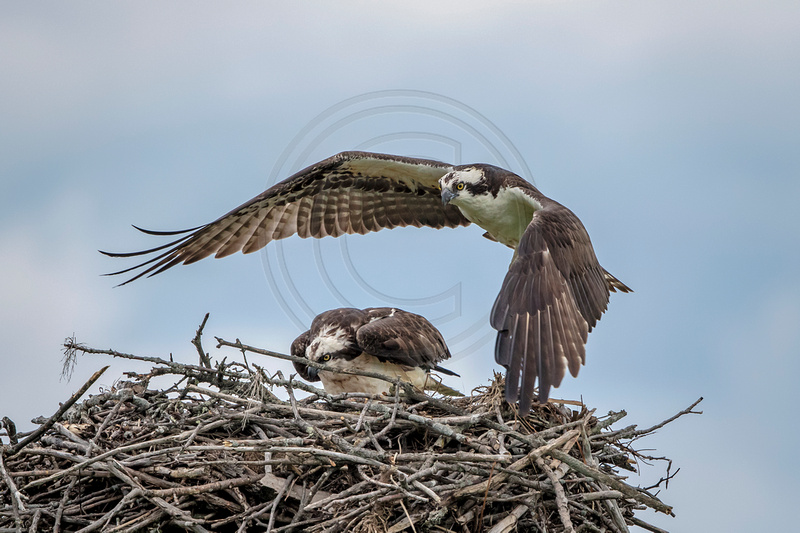