Bald Eagle with an air freshener for the nest

Wow, I think I'm still shocked by the events of today as the entire day went completely different than planned. Not even a week ago, I had planned to work half a day today, then head up to Keene Valley for the weekend to hopefully photograph the Great Gray Owl that has been up there. Then we got a horrendous snow storm on Tuesday that dumped just over two feet of snow in our area and just over three feet of snow in the Keene Valley area. I wound up cancelling my trip up north because the owl hadn't been spotted in days.

During my trip planning up north, a meeting was scheduled for 10am today to discuss the memorial of our beloved eagle who was killed by a train a few weeks ago. During the first five minutes of the meeting, some new information was brought to our attention that was completely shocking. The eagle who was banned 21 years ago along the Delaware River in Sullivan County and determined to be a female due to size and measurements (which tends to be roughly 85% accurate) was discovered during the necropsy to be a male. The activities of this eagle have been monitored for the past 16 years in the Hudson Valley Region by the DEC and wildlife photographers. As for myself, I've only been watching, observing, and photographing this amazing eagle for four years. It was very shocking to learn that she was really a he. The news threw me off completely.

Over the course of the week I had worked many extra hours so I could take this afternoon off without having to use vacation time, but then when my trip cancelled I figured I would just work. Well, after hearing this shocking news, I was rather glad I had already put in over 40 hours of work time because when I went back to work after the meeting it was difficult to concentrate. I managed to finish the project I've been working on for the past three days and decided I might as well take the remainder of the afternoon off and go and enjoy the pair of bald eagles I've been watching. One may or may not be the female from the old pair. We believe it is because the behaviors are still the same, but who really knows since neither of them are banded. The afternoon wound up turning out fantastic. There was a lot of slow time, but then when the activity happened, it was awesome. We saw several red tailed hawks fly through the area (an immature who had flown threw relatively close), a pair of falcons flew thew at a distant and we watched the eagles bring three different sticks back to the nest. The last was awesome as it was a relatively big branch from a pine tree.

Although today's events wound up being completely different than expected, it turned into a good day of hanging out with some fun friends and enjoying time watching magnificent bald eagles. 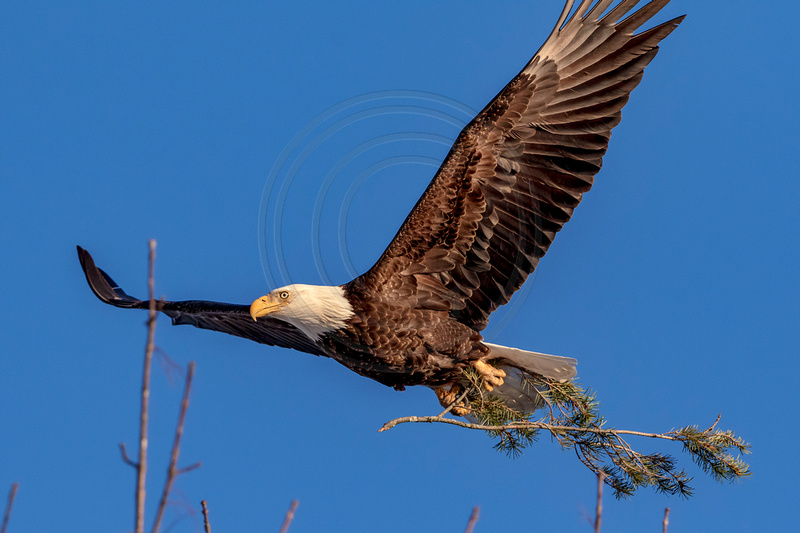