To all my blog followers, I know I promised to be more active with my blog, but I have no clue where the time has gone since I've been home. I feel as though there is always something going on and I'm really busy. But don't get me wrong, because that is a good thing!  :-)

Today I decided to work from home because my parents were going to lunch with some extended family whom I've never met and I really wanted to meet them. My dad's cousin, Josephine and her husband, Tom recently purchased a house in the area and my parents invited me to have lunch with them. It was very nice to meet them and I hope that I'll see more of them after they get settled in. In a way, I have to say that meeting Josephine and Tom was another positive outcome of facebook as my father has been reconnecting with extended family through facebook over the past couple of years. In fact, I've learned of many relatives through facebook and Josephine is now the second one whom I've met since my family has been getting in touch with extended family. It is really nice getting to know more of the family!

Lunch was very nice today and I thought it was going to be the only thing I did outside the house, but then the evening came and I needed to get out so I took advantage of the good weather and  went to the salon for a relaxing pedicure. After, I stopped at the liquor store and flirted with the owner, Ned. He's such a cutie and he's been flirting with me since last winter, but has yet to make any type of a move. I'm not really sure what to think of that. Any suggestions????? lol

Anyhow, I decided to just relax this evening with a movie and when I put the dogs out, I realized that there is such a beautiful moon out there. Apparently last night was a full moon, but it was so overcast that I did not see it. Here is the beauty I got to enjoy tonight! 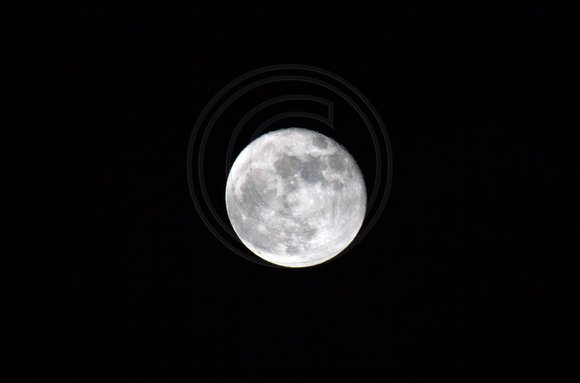