Hello to all my followers! I'm really sorry that I haven't been posting much lately, but I have been trying to get to it as much as possible.

I've been home since Friday and it sure does feel good to be home. Sleeping in my super comfy bed, relaxing hot baths at night, and lots of space compared to the camper, lol. Jim and the boys came home with me for the weekend and we had fun going to the mall, playing wii at my place, and enjoying the car show at Mills Mansion. I wanted to do a blog post on Sunday since I took lots of pictures from the car show, but sadly I didn't get around to it because I was busy getting my outside work done after they left. I guess you could say I got things prepared for winter out there! In fact, I've been so busy over the past few days that I haven't even gotten those pics off my memory card.

One of the nice things about being home is that I've had the chance to catch up with some of my friends. Wish I had more time to catch up with everyone, but it is difficult to coordinate schedules and get together with everyone. Today I mostly caught up with my office mate, Kristine. For roughly 7 years she and I have shared an office and spent 3 days a week together working and chatting. We've gone through a lot together personally and professionally and I have really missed not seeing her as often since I've been going to camp. I think now I see her about 2 days a month, so when I am in the office we do have a lot to catch up on. Today as we were heading to the cafeteria for some lunch, we stopped to look at this fascinating mushroom that we had both spotted earlier in the day (separately). While stopped Kristine mentioned that we really needed a pic of it, so I took out my cell, took pics from two different angles, and immediately posted them to FB because I was far too fascinated by the way it looked and had this need to share it immediately. The pictures received a couple of comments, although not nearly as many as I would have thought. Perhaps people were too embarrassed to say something. Or shocked that I would post such an image publicly, lol. Anyhow, because I'm still such a child at heart and got such a good laugh out of this mushroom that Kristine and I looked at up close and personally, I thought it really needed to be my blog photo!

I hope you all get as giggly over the mushroom as I did! 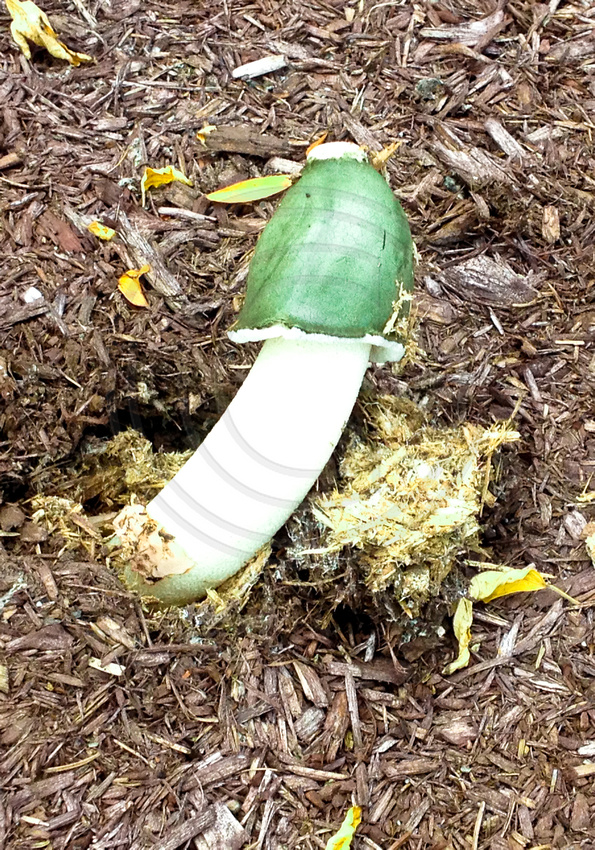