It's a beautiful, sunny, Sunday morning here and I'm just kicking back and relaxing with my coffee. I plan to head out later with my camera, so I figured I would enjoy the down time this morning and hang with my two kitties before I go out.

I've been weeding through my Florida pics for months now and am getting close to finishing them up. Hopefully by spring I'll be all caught up and working on the photos I took since then. One of the things I really enjoyed about this last trip to Florida was all of the Wood Storks I got to see. In past trips I went to locations that listed having them, but I had not seen a single one. This trip, I had the pleasure to see them at several locations. However, none of them were like the Wakodahatchee Wetlands.

The Wakodahatchee Wetlands is just a few miles from the Green Cay Wetlands and Nature Center, so it was really easy for me to enjoy both locations each day. Wako offered a 3/4 mile boardwalk that went through a few different terrains: open water pond, wooded area with cypress trees, and islands with shrubs for nesting. It was a huge rookery with many different types of birds, big alligators, lots of iguana's of various sizes, and marsh rabbits. However, the majority of wildlife there were the wood storks. They have nearly taken over the rookery. The wood storks were all nesting and they had young at various ages. Some were so little and fuzzy that they were still considered hatchlings, while others were already starting to branch and venture out a little. Sadly for the branching ones, if they were low enough, they did become alligator food. And yes, I did witness this a couple of times. I quickly learned that if an alligator was lurking around under a nesting area, it was likely going to feast off of a young bird. There's nothing like seeing the circle of life in person. This location was good both morning and late afternoon as I got to focus on different parts of the boardwalk at the two different times of the day.

The funny thing about wood storks is that as I kid, I was told that wood storks deliver babies to mom's and dad's. I'm guessing many children were told this old tale, so naturally I couldn't help but to think that while I was there. To my surprise, wood storks were extremely loud, making this constant honking sound and since they were all around me, it was like listening to wood storks in Dolby 7.1 Surround Sound.

Wood Storks are a large wading bird in the America's: North America, South America, and the Caribbean. They have the ability to adapt to tropical and subtropical wetland habitats. They nest in trees that are surrounded by water and can often be found in rookeries, similar to the one at the Wakodahatchee Wetlands. Their diets consist of mostly fish, but they will also eat insects, frogs, and crabs.

It was such a pleasure to see the wood storks as they were busy grabbing branches and twigs for their nests and taking care of their young. I even found an area where the water level was lower and they took some time out to bathe themselves. Overall, a very good time, although some type of hearing protection would have come in handy.

Anyhow, it's time for me to get moving. Enjo 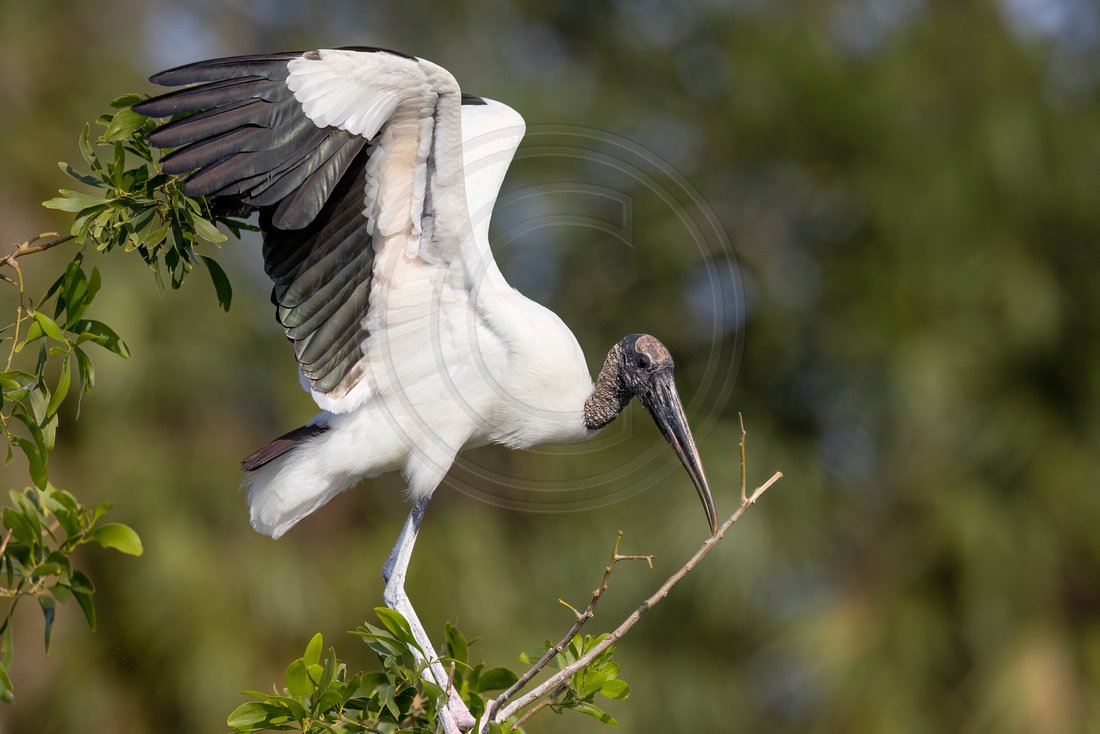 Wood StorkThis is an image of a wood stork who was just returning to its nest at the rookery at the Wakodahatchee Wetlands in Delray Beach, Florida. This image was taken by Debbie Quick from Debs Creative Images.