Osprey with a fish

Hey all, sorry I missed a post yesterday. I was so busy all day that by the time I sat down, I was too tired to pick a photo and write about it. Today however, was a much easier going kind of a day after a rough start.

I spent 26 years as a dog mom and now I am a relatively new cat mom. Wow, what a difference. I had no idea it was going to be so different to have kitty babies than having lil pupper nutters. One thing I'm learning is that these crazy kids will sleep all day and then play all night. This morning, they woke me up at 3:30 am while they were wrecking our home. I got up a couple of times to deal with the issues and by 4 am I knew I wasn't going to get any sleep, so I made coffee and snuggled up on the couch with my coffee while playing games on my cell. By 6 am they settled down, so I went back to bed til 9. Interrupted sleep sure is a challenge and so I basically chilled at home before going out to photograph short-eared owls.

While I was driving to my location I was once again thinking about camping season and all the things I need to start gathering before I open the camper. With that, I thought I would share another one of my favorite things about camping season.... Osprey! There are so many osprey nests near where I camp, but I do have a few favorite spots I like to stop at. One in particular is my absolute favorite and I've been following that nest for a good 8 or 9 years now. I've seen so much and I've learned so much watching that nest.

When I first started following it, the pair was so cooperative. They were never bothered by my presence and they just did their thing. Then, roughly 4 or 5 years ago, I returned in the spring to check on them and things were different. The female was not at all tolerant. I had to be very cautious about keeping my distance and learning what her comfort zone was. It was very obvious that something must have happened to the original female and this was a new one. I've continued to periodically watch the nest over the past few years, and she has not gotten any more tolerant. With that, I don't go nearly as often as I once used to and I keep that distance that I know she is comfortable with. The male however, he doesn't care that I'm there to see them. He puts on a great show and he'll fly in close to me before going to the nest. The photo I chose to share today is one of him bringing a big fish back to the nest this past season for the three young they had. He circled around several times and gave me a nice look at the prize before he dropped it off to his family. I was so thrilled about that.

Osprey are also known as a fish hawk, a sea hawk or even a lake hawk. The males have a very white chest while the females have a white chest with brown speckling that makes it look like she is wearing a necklace. Osprey's diet consists mostly of fish. In fact, I've never seen the osprey bring anything but fish to the nest. Because their diet consists mostly of fish, they can be found near bodies of water such as rivers, lakes, and ponds. Like other raptors, they do mate for life and they generally have 1-3 hatchlings every year. In the fall, they do migrate south, especially those in the Northeast because as the waters freeze, they need to be where there is open water for fishing. They are beautiful and large raptors. And as pretty as the adults are, I do find their young to be even prettier and naturally so much fun to watch.

Here you have it. The male osprey bringing a very nice sized fish to the nest for his family. 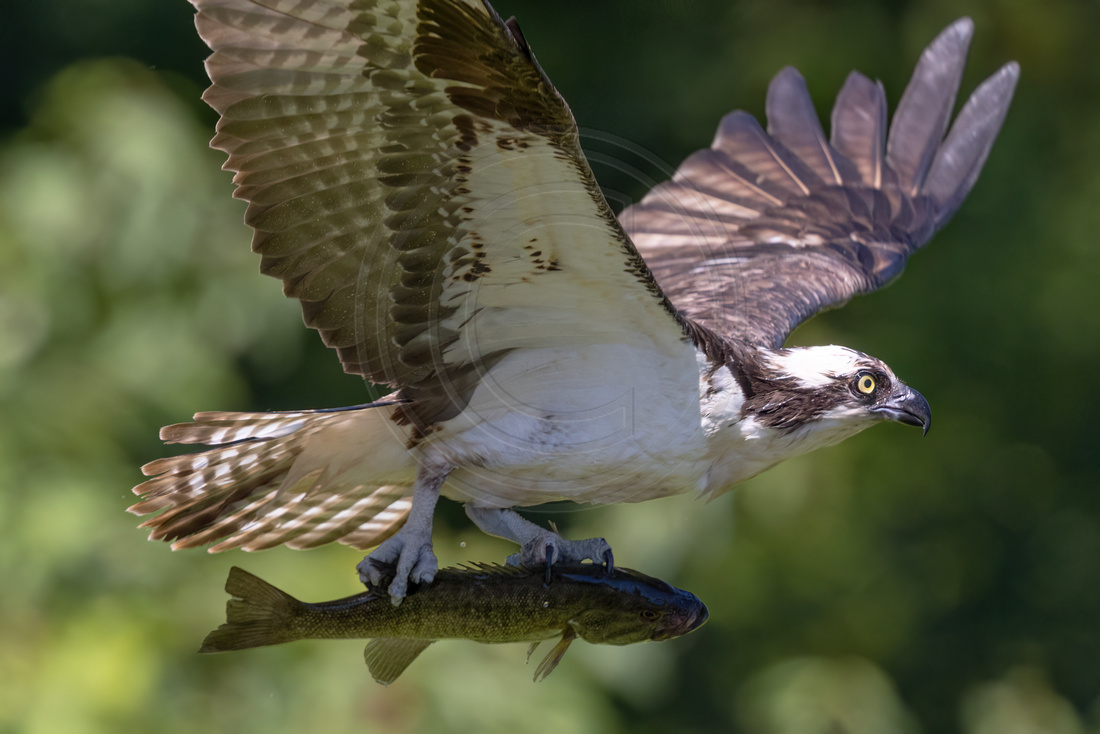 Osprey with a fishA male osprey in flight with a fish in his talons to bring back to the nest. This image was taken by Debbie Quick from Debs Creative Images.