A Day at the Track

Today I had the pleasure of joining my buddy, Bob, on an outing to Lime Rock Park in Lakeville, CT to watch and photograph the auto races. Every Labor Day weekend they have the biggest race of the season. This year was the 36th Annual Historic Festival and the theme was "The Beauty of Bugatti - Lime Rock pays tribute to French elegance".

There were eight different groups and each group had the opportunity to race twice. Sadly two of the races were cut short due to unsafe track conditions that needed to be cleaned up. That wasn't too bad as we did get to watch 14 full races. The groups present at this weekends event included:

We arrived at the track shortly after 9:00 and missed the first group on the track. We set up our chairs then headed down to the paddock to check out all the cars on display. I couldn't believe it as there were so many Bugatti's and it was so much fun to look at them up close. In addition we checked out many of the other cars and then began to make our way back up to our seats. On our way up, the announcer was introducing Group 4 and I heard that the Austin Healey Sprite was in the group, so we quickly made it back so I could watch it on the track as that is always my favorite car at Lime Rock. It is an orange and yellow car with round features. Every time I see it, I think it is the absolutely cutest car ever.

We stayed in the area of the hill for the remainder of the morning and enjoyed the cooler temps, overcast skies and the nice breeze. All went well up until Group 7 when something happened on the opposite end of the track that we couldn't see. From what I heard there was an accident and the driver of a 1965 Chevy Corvette, Jim Glass, from Kingston, NY was rushed to the hospital by ambulance. I don't know how bad the accident was, but my prayers are with Jim for a speedy recovery.

After group 8 raced, we enjoyed a nice little lunch break and took another walk through the paddock where we got to enjoy an air show and we met a beautiful little dog named Enzo. The funny part of this trip to the paddock is that we were there for the National Anthem and had the pleasure of hearing Enzo howling along to it. It was so cute and so funny that we just simply had to go meet him. We then stayed in the paddock area and watched the second race of the first group before headed back towards our seats. By this time it was a lot warmer and the sun was beginning to beat on us.

We spent the remainder of the races up on the hill and enjoyed it as the sun shifted behind a tree giving us shade. It was really nice to relax and enjoy the afternoon from the hill. I stepped away once to get some Italian Ice and totally missed the formula car that went off track and had the passenger side wheels go completely off the ground. From what I hear, the driver did well to correct it and get the car back on the track. My friend Chuck got some pretty cool pics of the incident and I look forward to seeing them in closer detail when he uploads them to FB.

The saddest part of the afternoon was when something happened to Austin Healey Sprite and he wound up getting towed off the track on the last lap of the second race. I hope all is well with Sprite and that he makes it back on the track on Monday. My pal Bob said he would let me know since I probably won't go back.

The day was fantastic! It was an excellent event with good friends and really nice weather. The best part of it though, which is always my favorite part, is seeing the Mini Cooper's on the track. There were three of them in Group 3 (Tin Top Dreams) and two of them stayed relatively close together for most of the race. #61 is a yellow 1961 Austin Mini Cooper S driven by Donald Racine from Grass Valley, CA and #177 is a red 1966 Morris Mini Cooper S driven by Dennis Racine from Grass Valley, GA! Way to go guys, thank you so much for giving me the opportunity to get you both in the frame together! 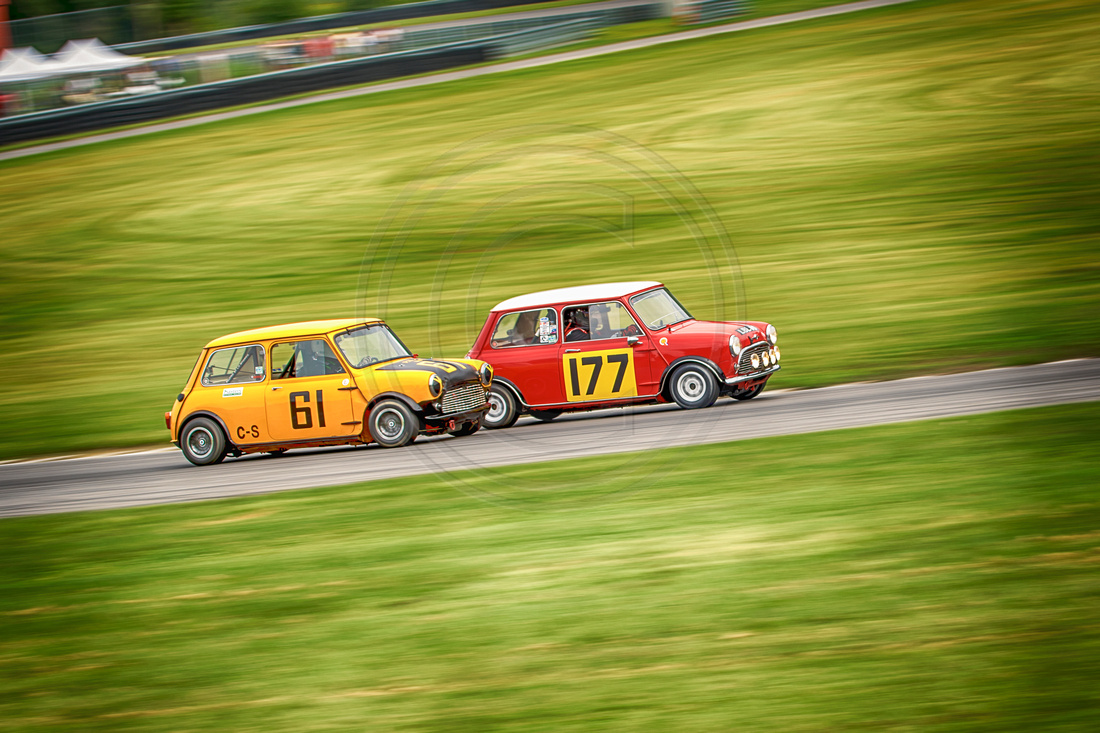