It was a short, 4 day work week, but it seemed much longer due to me being sick and the seriously cold spell we've been having.

I began the week with a head cold that I caught from my sister last week and have been dealing with some unseasonably cold weather. On Sunday night I had a pipe freeze and spent the first two days of the new year with no water and brutally cold temps. Then Thursday we had a nasty snow storm that dropped roughly 5 inches of snow with some heavy winds. I went outside during my lunch break to photograph my feeder birds and was totally frozen when I went back in only 45 minutes later. Although I froze, it was so worth it as I got some great shots of my cardinals and blue jays with the falling snow.

Again today, I thought I would go out at lunch to photograph the birds. The sun shined beautifully, but the temps only reached 10 degrees and the wind whipped and whirled around me, giving a wind chill value as low as -8 degrees. Although it was brutally cold, I still enjoyed seeing and photographing the birds in my neighborhood. I had a really nice opportunity with a white-throated sparrow who was eating this red stuff off of the weeds. I don't know what it was called, but it was fun to see the red all over the birds beak. Then I stumbled across an area where a whole bunch of robins were flying in and out of the pine trees and eating the berries off of them. Just as I was leaving, I realized there were a bunch of starlings in another area. They stayed fairly hidden in the pine trees, but I did get a few shots of one that emerged from the center of the tree.

I watched and photographed the birds for roughly 20 minutes, then out of nowhere they all flew. My first thought was that there must be a hawk around. Sure enough, a few seconds later I spotted a red-tailed hawk circling above. It was rather high, so I didn't get any shots of it, but I enjoyed watching it circle and the way all the songbirds fled when it entered into their territory.

The weekend has now begun and I hope to get out tomorrow, but after looking at the weather I'm not so sure I will. The high for tomorrow is a whopping 8 degrees with a wind chill value of -16. It's only the beginning of January and I'm already longing for Spring. I think it is going to be a very LONG winter.

I hope you all enjoy the shot of the Robin I thought I would share on this bitter cold winter day! 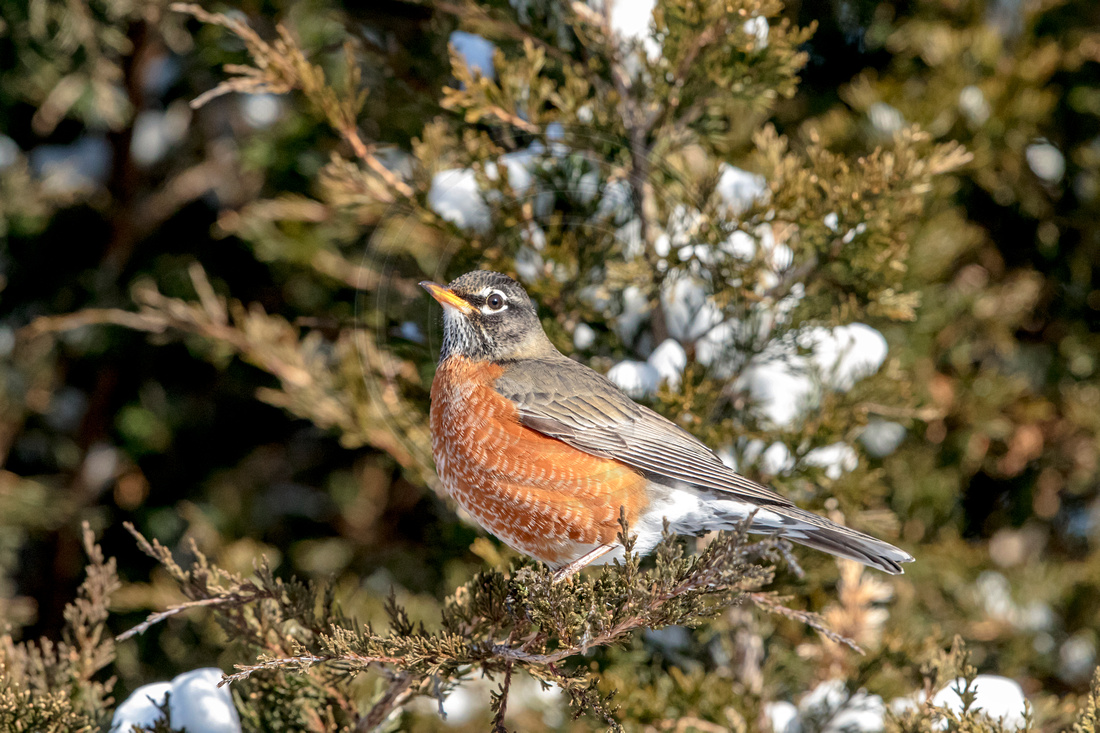