Last summer as I stood at the boat launch in Ticonderoga, I watched as Osprey came and went from land to the lake and back to land. I assumed there was a nest in a particular area and I intended to check it out this summer. I finally went and did so today and to my surprise it was very easy to find and in a fantastic location. One minor problem though, camera's with telephoto lenses and monopods/tripods are not permitted. One of the friendly staff on the grounds approached me and went over the rules with me and I was sad, but very respectful as the person giving me the message was only doing her job. I was respectful of the rules, I thanked her and explained to her that I'm a wildlife photographer and that I would leave. She then proceeded to tell me that she would make a call and see if she could get permission for me to stay in the gardens and photograph the wildlife. Minutes later she returned with a phone number and the name of a person I could call and speak to. I made the called and understood and respected the contract I needed to sign to be able to hang out for the day with my camera. As I sit here this evening, I'm still so grateful that I was given the opportunity.

Once the morning negotiations were established, I got to enjoy nature and my surroundings. I hung out near the lake and in some absolutely beautiful gardens and had the opportunity to photograph osprey, a hummingbird, a couple of butterflies, a goldfinch and some beautiful flowers. The osprey didn't move much, but the kids sure did do a lot of yelling for food. One kid flew once when I first arrived, but then sat in the nest the entire time guarding the fish he had in there. The other kid moved around from tree to tree and tried to go to the nest once, but was chased out by the kid in there with his meal. Eventually in the mid afternoon, the female went to the nest with a fish for the other kid and he followed mom into the nest. Mom turned the fish over to him and he flew to a nearby pine tree to eat it while mom flew to another nearby tree to watch.

In addition to watching the osprey and enjoying the garden, it was also nice to talk to the tourists who all came through and had questions about "the birds" in the nest and the trees. Some of the people knew they were osprey and others weren't sure what they were. It was nice to chat with people and share my knowledge.

The osprey were fun to watch and they landed in a few different trees. That was really nice to see, in fact, it was really nice to get a different scenery with the osprey from the scenery I've had from the past four years with the other osprey nest I watch. It was definitely a fantastic day and it was only 10 minutes from the campground as apposed to the 30 minutes I travel to the other nest. I'm really hoping I'll be able to work out a seasonal contract for next year so I can keep a closer eye on this nest. 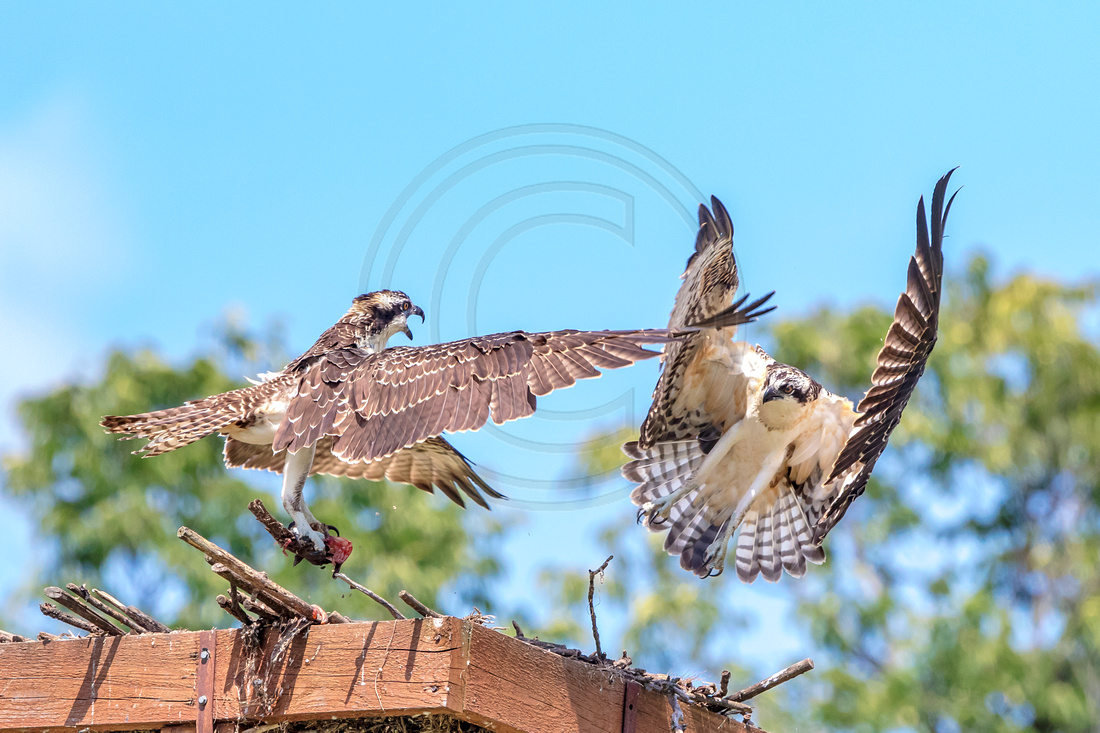