Osprey kid out and about

I was first awakened at 5:55 this morning by some seriously heavy rain that startled me out of my deep sleep as it began to hit the camper very hard. Once it registered that the loud noise I was hearing was simply the rain, I rolled over and went back to sleep. The boyz and I wound up rolling out of bed after 8 and it felt so good to sleep in. Although the morning began very rainy, it eventually passed and turned into a gorgeous day.

I was in no rush to get out this morning because I was waiting for a friend to join me at camp and because I was busy setting up my new Mac as I waited for his arrival. He arrived around 11:30 or so and we immediately headed out to go see my favorite Osprey family. When we first arrived on location, all the osprey were out and about, so I went to check on the sheep. The sheep were so funny as when I was approaching their pen they were nervous and ran away. I stopped and watched them and they must have felt comfortable because they all started to head towards me (near the electric fence). I was so tempted to try and reach over and pet one, but I refrained since I didn't want them or me getting electrocuted.

I didn't stay with the sheep too long before heading back up to my friend and the osprey. As I was heading back up, the kid and one of the adults flew into the nest. The adult didn't stay long, but the kid hung out for a while. Eventually the kid flew and headed towards the water. He wound up landing in a really nice spot on a dead branch that was low to the ground and overlooking Lake Champlain. My friend and I got some great shots and even watched as a robin harassed him and chased him away.

The kid was in and out of the nest only a few times today, but when he went out he landed in some great spots. Later in the afternoon he landed in a tree overlooking the lake. It was really breezy and he landed on a very thin branch, so it was fun watching him try to balance and hang on. I got some great shots of him flapping his wings to try and maintain balance.

Not much else happened. Mom flew into the nest a couple times with the kid and dad brought him two small fish. The light was nice most of the afternoon as clouds came and went. 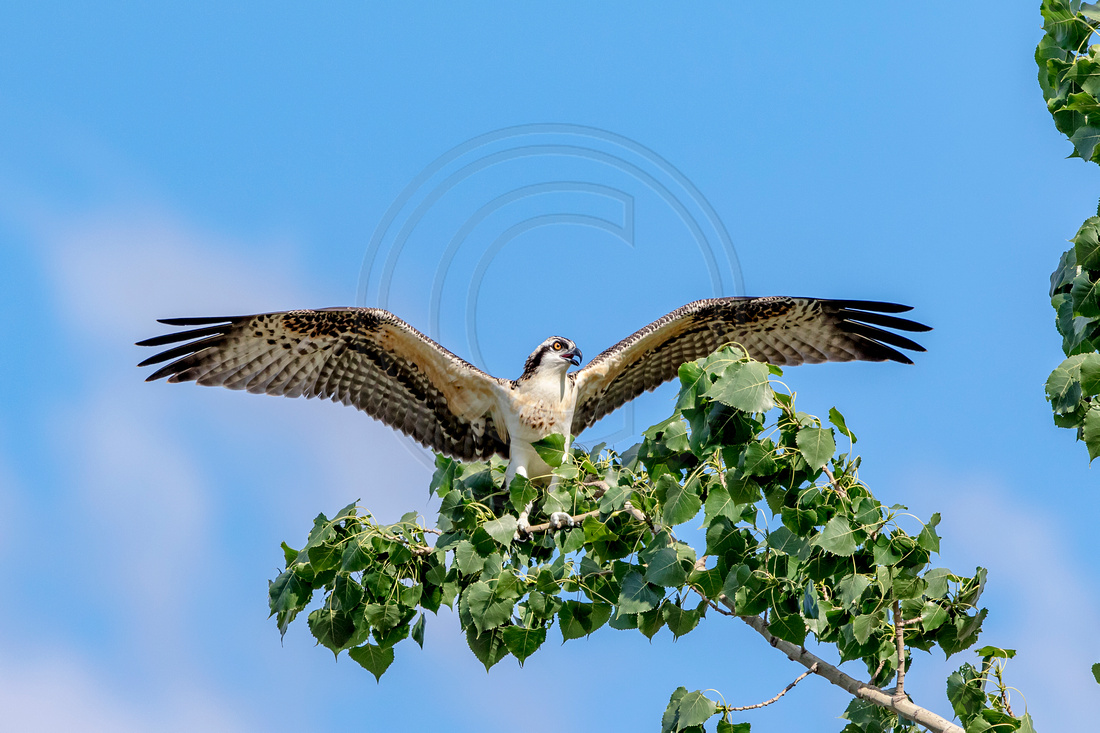